Scap Heap to Slayer Jeep - Finding the Jeep & It's Problems

Finding the Jeep and its Problems

Finding our ride to survive the zombie apocalypse and taking it from heap to roadworthy to awesome. 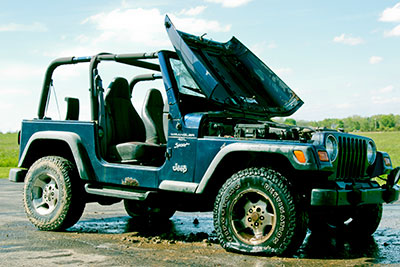 From the Junk Yard

Finding the right Jeep entailed trips to local salvage yards here in Columbiana, Ohio. The 4WD team had a limited budget and was in the market for anything – it could’ve been a Wrangler or a Cherokee. When we came across the blue 2000 TJ Wrangler at Davy’s Salvage Yard, we thought it could be the one, but needed to do some closer inspecting.

There are red flags to look for when finding a Jeep to fix up. First off, we checked for frame damage. A bent frame can be repaired, but it gets pricey and we want to keep costs down. Next, we poked around for drivetrain damage. If core pieces like an engine, transmission housing and the transfer case are cracked it’s time to turn and burn. Another telltale part is electrical – like a leaky roof you can chase electrical problems all day. We don’t have the time or patience for that.

Luckily, this TJ checked out and we knew it was the one. It had nearly 130,000 miles on it and was the Jeep that everyone else had given up on and put out to pasture - our very own Seabiscuit. We rose to the challenge of transforming it into a champ.

Before we begin our backyard build, we’re going to need some penetrating oil to loosen up those rusty parts and yank them out.

The Jeep we found had no top, no doors and no prayer.

In fact, it was seconds away from being crushed.

The 4WD team zeroed in on the 2000 TJ Wrangler with a 4.0-liter, 6-cylinder engine. To us, it was a diamond in the rough. The dream was to make the Jeep roadworthy and to achieve that, it had to be safe, reliable and drive-able.

By this point in its life, the TJ we found was well past its prime and unwanted. Restoring it began with the business of stripping it down. Then, it was cleaned out and cleared of dirt, grime and even old French fries. Next, we attacked how it ran and quickly discovered the engine was unreliable and misfired. Did we mention the battery was dead, it had low oil pressure and the ‘Check Engine’ light was on? 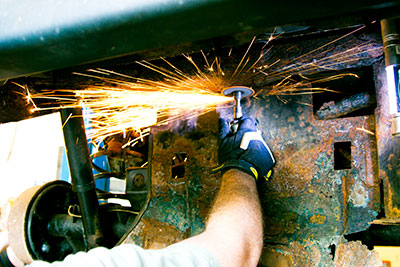 Our 4WD team of technicians sparked to the challenge and began the task of fixing up the Jeep to get it roadworthy.

Pictures are worth a thousand words and they’re going to document the journey from rigor mortis to roadworthy.

Next: Restoring the Jeep – Making It Roadworthy