Finding our ride to survive the zombie apocalypse and taking it from heap to roadworthy to awesome. 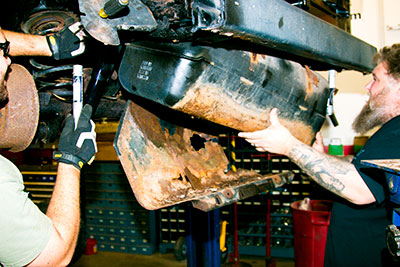 The 4WD team had to begin by replacing the battery with an upgraded Optima red-top, just so the project Jeep would even move. Next on the list was safety, mainly the gas tank and the gas tank skid-plate. After hours of fighting with rusted and broken bolts, the TJ’s factory skid plate and the tank itself were removed. Once the rusted tank straps were swapped out with Omix replacement units, a pure Jeep armor skid-plate was bolted into position and the fuel system was good to go.

Then the team began stripping off some of the broken and rusted pieces including the sidesteps, shattered windshield, torn weatherstripping, broken fog lights, rusted trailer hitch, flat tires and even smashed bumperettes. Just like a game of whac-a-mole, every time they removed or replaced a part, another issue seemed to pop up. Leaking fuel lines, rusted bolts, bad wiring and stripped lug nuts all slowed progress down, but the 4WD team pressed ahead. 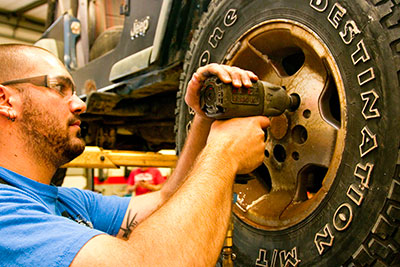 Many issues like the power steering noise and the tailpipe rattle were simply loose bolts or hangers that needed a quick twist from a box wrench. The team focused and all the little projects started to get done. They added Smittybilt trail mirrors to make the TJ legal without doors, a Smittybilt Bikini and windshield channel to make it comfortable without the top on.

The quick addition of a No-Doors lights-out kit will keep the dome-light from killing the Jeep’s battery again. The final in this process was a good cleanup inside and out, including a coat of POR-15 on the frame and underside, as well as covering the entire tub in POR-15 to protect against the tortures that lie ahead.

We can now call this Jeep ... Roadworthy!

Next: Revving Up From Roadworthy to awesome