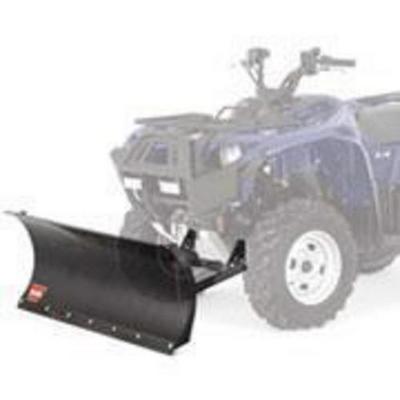 If your selected parts are identified with a message stating:

Not all products eligible for free shipping-certain exclusions apply

If your selected parts are identified with a message stating:

Not all products eligible for free shipping-certain exclusions apply

WARNs New ProVantage ATV Plow system is the most versatile, durable, and high performance plow system on the market. With a new rapid connect mounting system, WARNs ProVantage will help you get your plowing jobs done with speed and ease. WARNs new ProVantage System will turn plowing season into your favorite season of the year.

Thank You For Submitting Your Review.

this isnt so much of a review about the plow but of the mount for the vehicle, with that said, the instructions are lacking, but usable, the exploded views were the most helpful, i found it easiest to put mount together loosely with all bolts in place before attempting to put in on vehicle, then set that aside so i didnt have bolts of 3 different parts all mixed together, now the ears that are the pivot point come in mount, which is odd because it gets bolted too the push tubes, assembly of plow is straight forward, just have to bolt on the wear bar, the push tubes assembly, again are lacking in instructions but exploded view was most helpful, make sure you separate all nuts and bolts according to sizes, it makes it easier, now with all that said, this particular mount works on the 2015 but is made for the 11=14 year models, now the qualifiers, since it wasnt made for this specific year, there was a minor issue, there are 2 bolts which you have to remove under the quad right behind tow hook, there are 2 more larger bolts right behind those, now on the 2014 model the 2 bolts you have to remove are on a slightly peice of tapered metal plate, on the 2015 it is a straight plate, issue when mounting, the plate that you put the 2 bolts through that you took out, is too long, and hits the larger bolts behind it, leaving a 1/4 in gap and the bolts you removed not long enough, easily remedied, by going and getting half inch longer bolts to make up difference of space and thickness of mount you are attaching, and some washers for spacers to fill in gap , bolt is 5/16x18. i hope this review helps anyone with a 2015 polaris 570 sportsman

In 1948, Arthur Warn founded Warn Industries to construct locking hubs for surplus World War II Jeeps. Ten years later, the Warn winch was manufactured to fill the need for a reliable recovery tool to aid off-roaders stuck in challenging situations. Since then, Warn has grown to offer a wide range of gear with the hallmarks of durability and affordability. 1988 spawned the aftermarket industry's first ATV winch and today their PowerSports line of winches ranks among the most esteemed in the industry and jeepers call on Warn for electric, hydraulic and severe duty components that get the job done. Shop Warn Now