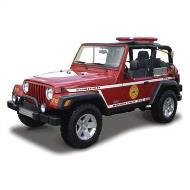 There are several reasons to invest in a scaled down Jeep replica. Whether you are an avid RC car builder, a collector, or you enjoy off-roading and want a die-cast replica for your desk or your mantle, choose a replica that best matches your interests. Maisto creates numerous replicas of production vehicles, including classic muscle cars and Maisto Jeep Wrangler fire trucks. Maisto creates both die-cast scale models and radio-controlled vehicles that can go off-road. The intricate replicas are great as toys, collectibles, or as a hobby.

Radio-controlled replicas come in all makes and models and there are many suited to off-roading. RC vehicles are a perfect fit for scaled down off-roading, where a small, electric- or gas-powered engine can tear up the trails as well as a full-sized power plant in a traditional vehicle. An RC Jeep can tackle rocks and rugged terrain, jump ditches and perform flips or other stunts.

If you want an RC vehicle with an electric motor, you can run a vehicle with high torque and quick throttle response. RC Maisto Jeep Wrangler fire trucks may also use a gas engine, which provides a consistent level of performance throughout the engine’s power band, just like a full-sized engine. An electric RC car requires a fresh battery or a lengthy recharge when its power runs out, while a gas engine simply needs to be refueled. However, a gas engine generates a lot of exhaust fumes, while an electric motor produces no emissions at all.

Maisto produces an extensive line of replica vehicles made of die-cast steel or aluminum. Die-cast replicas are not radio-controlled or self-propelled; they are simply scaled down models of full-sized vehicles. Maisto die-cast replicas feature true-to-life details and several moving parts, including a moving steering system, accurate paint, badging, decals and other vehicle-specific features.

A die-cast Maisto Jeep Wrangler fire truck replica is 1:18th the scale of the full-sized 2003 Wrangler and includes fully functioning doors and hood, a plastic red light bar, independent suspension and it’s available in yellow or red with detailed “Brush Fire Unit” badging. Die-cast replicas are available in a variety of makes and models, though and are an effective way of demonstrating your automotive or off-road enthusiasm from your desk or book shelf.

Collectibles as an investment

Die-cast replicas and RC cars are not just toys or display pieces. Some models also make a great investment. Using replicas as an investment strategy can be tricky, but it’s possible with a little research. Make sure to collect models from low production runs, but be careful not to stock up on duds. In some instances, low production runs are caused by a limited series for a special edition model. In other instances, the low production is due to indifference by collectors and hobbyists for the model in question. The former is a great investment opportunity, while the latter will only end up collecting dust, not value, over time.