These Are the Parts You’re Looking For

Han Solo’s starship Millennium Falcon was a famous, beat up, custom beast of ride which boasted the ability to outrun just about anything in the universe. It sits at the pinnacle of custom rigs, which is what got us all at 4WD wondering … what if it was a Jeep 4x4? 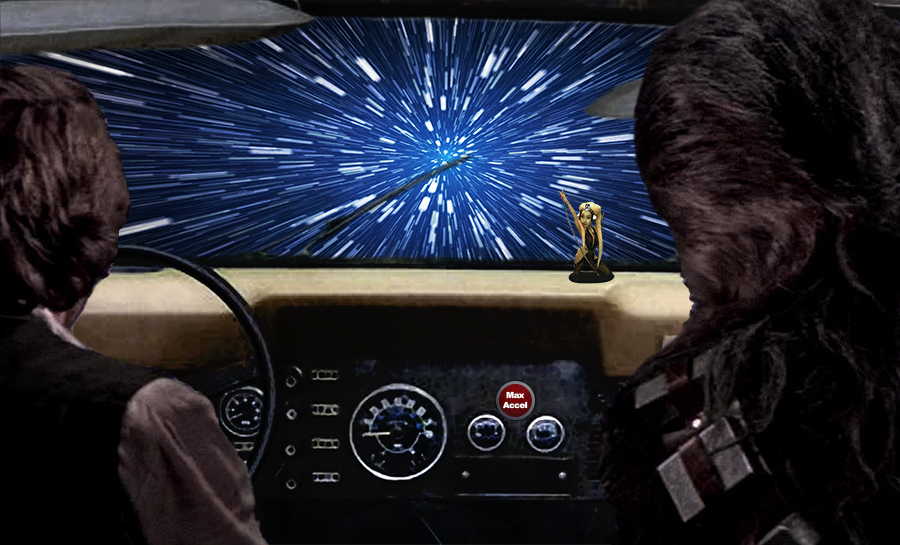 " You need all the help you can get; she's the fastest ship in the fleet!"

As soon as we posed the question, “What Jeep would Han Solo drive?” the answer became obvious: of course it would be a Golden Eagle. This special edition Jeep model debuted in 1977 and was produced until 1980 because of its tremendous popularity. The unique Golden Eagle badging and paint color were only some of its special features; the Jeep was also fitted with the largest motor of its time, hauling in at 360 cubic inches. Additional features new to the 1977 CJ-5 included power disc brakes and, on the Golden Eagle, a tachometer.

The CJ-5’s featured a fully boxed crossmember for improved rigidity as well as flanged, overlapped sheet metal for strength. It was bigger than the CJ models which came before it and also improved the braking system, suspension, seating and other aspects of the CJ line, such as a larger windshield and a hand brake.

We like to think he would have acquired the classic rig by besting the original owner in the King of the Hammers. Of course then Han Solo would have needed to add customizations far beyond the OEM parts.

"It's the ship that made the Kessel Run in less than twelve parsecs. I've outrun Imperial starships. Not the local bulk cruisers mind you, I'm talking about the big Corellian ships now. She's fast enough for you old man."

The Golden Eagle rolled off the line with a truly unique set of gold rims, but for Solo’s purposes, he would’ve needed something with a full beadlock. Not one to be overly concerned with what’s “street legal” or not, Solo would likely opt for the Pro Comp Vapor Pro Beadlock Wheels for desert racing, the street legal alternative being a set of Hutchinson. D.O.T Beadlock wheels. For optimum soft-terrain traction, the Millennium Eagle would need tough 35 inch tires: Baja T/A by BF Goodrich.

"She may not look like much, but she's got it where it counts, kid. I've made a lot of special modifications myself."

Parts, especially for the 390-401 cid engines, for the Golden Eagle CJ5 are rare and rather expensive, so it makes sense that Han Solo would cobble together a performance racing rig from whatever junk yard parts he could find. Since the Millennium Falcon was hybridized (schizophrenic), it would be suiting for the Millennium Eagle to have some scrapped Chevrolet parts.

Solo’s engine would be rebuilt by stroking the factory 360 crank and boring the block, then adding .030-inches over 400 pistons and 250 6-cylinder connecting rods. Those upgrades would be enough to create an engine with higher compression and 383 inches of displacement. Toss in a high-performance camshaft and Edelbrock or Indy cylinder heads intake manifold and the Jeep starts being able to compete with the Starship. To round out the build, he could also give her a factory 80’s AMC electronic ignition.

To really make her worthy of the Millennium name, we’d also include a fuel-injection carburetor and a nitrous-oxide system.

"You came in that thing? You're braver than I thought."

Any desert racer is going to need a serious gearing upgrade, especially a rig from as far back as 1977. Replacement Dana 60 axles with CTM racing U-joints would be absolutely required if the Jeep were to have any hope of surviving Solo’s racing style and not-quite-regulation full-custom upgrades. In the rear, the Millennium Eagle would be equipped with a Currie Rock Jock Dana 60 Detroit locker with a 430 gear ratio and an ARB locker in the front for a pair that would maximize his rock crawling capabilities and hold up to one heck of a beating.

"We're losing a deflector shield. Go strap yourselves in. I'm going to make the jump to light speed."

Speaking of holding up to a beating, even with no Duralloy plating to reinforce with, that Jeep would have some serious armor and protection. Full underbody skid plates, corner guards, rocker panel protectors and front and rear Smittybilt tube bumpers would just be the aftermarket parts. Much of the work would probably be customized, jerry-rigged, repurposed scrap.

"Uh, we had a slight weapons malfunction, but uh... everything's perfectly all right now. We're fine. We're all fine here now, thank you."

In order to accommodate the beefed-up desert racing wheels and tires, Millennium Eagle would be equipped with a suspension lift and hardcore shock absorbers. We imagine Solo would customize a long travel suspension lift, probably six or seven inches. It would take a massive set of triple by-pass coilover shocks to even try to keep the jolting ride from shaking off any parts – we’re going to go with custom-built 16” King Shocks.

"Boy, it's lucky you have these compartments." "I use them for smuggling. I never thought I'd be smuggling myself in them."

When your co-driver’s a wookie, protecting the interior of your ride can be just as vital as protecting the exterior. Besides fitting the interior with heavy-duty seat covers and floor mats, there would need to be plenty of additional storage to pack away the myriad of parts and tools they’d inevitably be needing for repairs. Halfway across the deserts of South America for the Dakar Rally, a hard thump on the hood isn’t always enough to get her moving again.

Add a big red button into the dash for Chewie to punch and you’ve really got something.