Famous Jeeps and Their Celebrity Owners

Historical and Fictional Figures Who Love to Jeep

The Jeep’s heritage is inextricably linked with its role as a military vehicle and when we think of famous Jeeps most of them have military ties. Movies and TV have been ideal ambassadors, bringing Jeeps into pop culture via big and small screens. Oscar winning war films featuring Jeeps include From Here to Eternity, Patton, The Deer Hunter and Platoon. Jeeps played pivotal roles on popular TV shows like Hogan’s Heroes, M*A*S*H, Mork & Mindy and The Dukes of Hazzard.

Famous people associated with Jeeps range from politicians to writers to international football stars. Of course, there are always going to be a number of celebrities including actors and musicians, who opt for Super Swampers, roll bars and tooling around in Jeeps. Here are a few of the iconic characters who have linked themselves with the iconic rigs in the public’s eye.

Before he became the 40th president of the United States, Ronald Reagan was no stranger to Jeeps. His B film career was interrupted in 1942 by World War ll, and driving Jeeps was part of his active duty in the Army Reserve as an officer and eventually a captain.

When he was governor of California, Reagan purchased a ranch as a retreat in 1974. At his 688-acre Rancho del Cielo northwest of Santa Barbara, Reagan could be seen horseback riding (a throwback to his days in the movies) and running trails in his sky blue 1983 CJ-8 Scrambler Renegade or his brick red 1962 CJ-6. The Scrambler was a gift from his wife Nancy and sported a personalized license plate with his nickname GIPPER and bunk boards that read Rancho del Cielo. 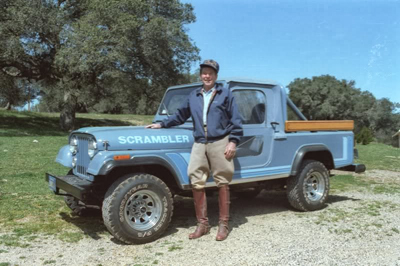 Former Soviet leader Mikhail Gorbachev and secret service members were among the passengers who toured the ranch in the Scrambler. When it came to a more utilitarian vehicle for odd jobs like hauling rocks and chopped wood and brush, Reagan’s red CJ-6 would be pressed into service. After Ronald was diagnosed with Alzheimer’s Disease, the Reagan’s visits to the ranch tapered off and both of the Jeeps were donated in 1995. The ranch was eventually sold to the Young America’s Foundation.

Today, Jeep fans can visit the Reagan Ranch Center on State Street in Santa Barbara to get an in person view of the Jeep Scrambler. Unfortunately, the CJ-6 is not on public display and is living out its days in a barn on the remote ranch. 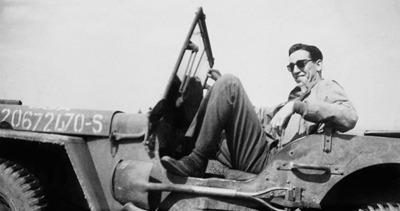 J.D. Salinger’s 1951 novel The Catcher in the Rye was a popular success that catapulted the acclaimed writer into the public eye. Trouble was, he didn’t appreciate folks making a fuss over him and following Catcher’s publication, Salinger withdrew into reclusiveness. His first connection to Jeeps began a decade earlier when he was drafted into the army to fight in World War ll. There are stories about him hauling around a portable typewriter in the back of his Jeep so he could work on his stories. Many of the stories he submitted to The New Yorker drew upon his wartime experiences and eventually Salinger wound up interrogating POWS as part of the counter-intelligence division.

Following the war and writing fame, Salinger retreated to Cornish, New Hampshire. Aside from Greta Garbo, he became one of the world’s most sought after recluses and those who caught a glimpse of him often spotted him driving in his old Jeep. The Jeep had curtains in the side windows and he reportedly drove it fast like he was back on the battlefield dodging bullets.

In the later years of his life, photographs of the elderly Salinger circulated showing him in Cornish with a beige Toyota Land Cruiser. Evidently, his preference for 4x4s that began during his service in the war stuck with him when he returned to civilian life.

International soccer superstar David Beckham made a splash in 2007 when he left Madrid to move to the United States and play for the LA Galaxy. A year later he was spotted in Beverly Hills driving a Jeep Wrangler. The black Unlimited Jeep sported a tube bumper and Pro Comp wheels. The Jeep community’s response was a big thumbs up. Enthusiasts found it refreshing that the mega-rich athlete and owner of a Lamborghini Gallardo, a Rolls-Royce Phantom Drophead Coupe and a Ferrari 360 Spider, among other cars, chose to pick his son up in a Jeep.

Jeeps appear in movies of all genres ranging from Goldfinger to Clueless to The Great Bikini Off-Road Adventure. Here are some of the vehicle’s more notable turns on the silver screen.

Jeeps populate the landscape of countless World War ll movies. When Frank Sinatra’s character Private Angelo Maggio dies in the 1953 Academy Award-Winning film From Here to Eternity, his body is loaded into a Willys MB Jeep. A Willys MB also makes an appearance in the World War ll movie Patton. The 1986 movie Platoon depicts the horrors of the Vietnam War and shows a CJ3B Jeep and Jeeps appear in Forrest Gump when young Forrest is chased by bullies in a Jeep and when he’s stationed in Vietnam during the war.

In the 1985 movie Back to the Future, Marty McFly, played by the irascible Michael J. Fox, skateboards to get to high school. To arrive faster, he grabs onto the back of a light blue Jeep CJ-7 and hitches a ride. In Back to the Future: Part ll, Marty time travels to 2015 in a scene that recalls him grabbing onto the CJ-7. This time, a camo Jeep Wrangler YJ zooms down Main Street and while airborne on a hoverboard, he hitches a ride. The 2015 Jeep was actually a modified, late ‘80s Wrangler YJ. The irony is that today in 2015 the Wrangler YJ is no longer being produced.

1993 blockbuster Jurassic Park featured a dinosaur theme park that required an adept 4x4 to take on the jungle terrain. Enter the Wrangler YJ, capable of outrunning velociraptors and other paleo pests.

The 2003 sequel to the movie Lara Croft: Tomb Raider found Angelina Jolie ditching her Land Rover Defender in favor of a Wrangler Rubicon Jeep. Rubicon responded by producing a limited run Tomb Raider edition to support the sequel. Matching the Jeep in the movie, it came in bright silver and instantly became a collector’s item. The Rubicon in the sequel sported Mickey Thompson 35-inch tires and a Warn winch and had no trouble spiriting Lara Croft across extreme terrain on her adventures. 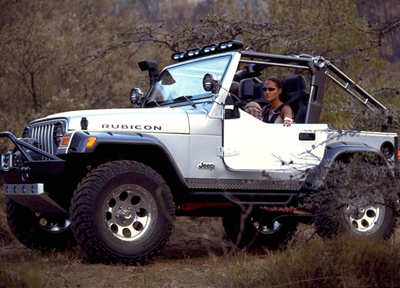 Blazing Trails on the Small Screen

The 1970s-80s were the heyday of Jeeps on television when they went well beyond their familiar wartime settings on shows like Gomer Pyle, U.S.M.C., Hogan’s Heroes, M*A*S*H and the HBO miniseries Band of Brothers. Whether they’re World War ll Willys MBs, M38s or CJ2A Willys Jeeps, they go a long way toward setting the scene for audiences.

M*A*S*H was a TV show developed from the 1970 feature film that ran on CBS from 1972-1983. The critically-acclaimed program was a period piece chronicling the drama and comedy of a Korean War MASH (Mobile Army Surgical Hospital) unit. Parts of it were shot at Malibu Creek State Park and Jeeps used included Ford GPWs, Willys MBs, 1953 military M38s and civil CJ2A Willys. Currently, at the Malibu filming location a burned, rusty M38 and Dodge ambulance commemorate the TV program.

The 1970s-‘80s Happy Days spinoff Mork & Mindy was set in Boulder, Colorado where Jeeps have always been popular thanks to topography and altitude. The opening credits showed alien Mork, played by Robin Williams, comically propped upside down in the passenger seat of Mindy’s blue CJ-5. The open air Jeep sported a roll bar and proved so popular that a 1/24 scale model kit of it was sold (without the Mork & Mindy figures included). 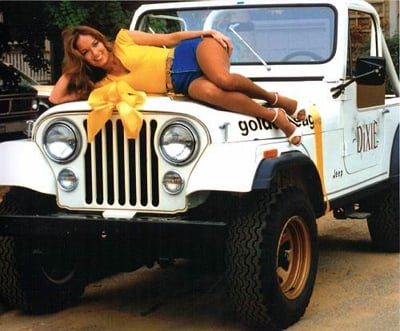 The final stop on our tour of TV Jeeps brings us to Hazzard County where Bo and Luke Duke and their female cousin Daisy resided. Originally inspired by the movie Moonrunners, The Dukes of Hazzard ran on CBS from 1979-85 and featured fun car chases, comedic adventures and a Jeep nicknamed Dixie. The CJ-7 belonged to Daisy Duke, although a sizeable number of viewers would be hard pressed to describe many of its features. Often, their focus was on Daisy’s racy, revealing outfits and the Jeep was an afterthought at best.

For those interested, it was a 1980 CJ-7 that shifted paint jobs and roll-bars during the show’s run. As a side note, the producers cashed in on actress Catherine Bach’s appeal by having her pose for a Daisy Duke poster. It was a huge success and among the poster’s biggest fans was Jeep appreciator Nancy Reagan. The 2005 movie starred Jessica Simpson and reprised the role of the Jeep Dixie, but this time she was a white Wrangler Rubicon TJ.